When I first came into contact with first person stealth games, it was Thief 1 which offered something very unique I hadn’t experienced ever before. As much as I liked the whole series, it was no surprise that I really enjoyed Deus Ex in 2001. Even more so because it combined elements from Thief and the RPG genre, which I really loved and still do, with first person stealth and alternative routes to take within a level. I was kind of surprised when Dishonored 1 was released in 2012, for it felt unique as Thief – in a video game landscape shaped by quest markers and other non-optional hand-holding silliness. I played the hell out of Dishonored, although the protagonist was bland, voiceless and didn’t have a ‘face’.

I bought Dishonored 2 at its release but never really got to play it – until a few days ago. Boy, this is literally my game, my genre. Arkane Studios did the same thing Bethesda did to Fallout 4: they finally offered a voiced protagonist. I need that to feel empathy and sympathy for any protagonist; it helps to make them believable, emotive and ‘real’ characters I care for. There aren’t only dialogs between the protagonist and NPCs, but Emily or Corvo (the protagonists you can select from) comment on items, places and events. While you don’t see Corvo or Emily as you play them, you have an idea of how they look because of in-game art work, pictures (e.g. from wanted posters) and finally from the character selection.

I like the linear narrative structure combined with non-linear hub-like gameplay, the many different routes and exploration, while nothing is folded out bluntly in front of you. For that I disabled the objective markers, though. It’s refreshing to refer to real in-game maps and clues to find your way, to find a building, place or person. One side quest got me taking a body to a nearby basement at a dentist’s office. How did I find the office? After scanning the surroundings, I saw a big tooth sign along an alley. That was my clue, not a meta marker telling me ‘how to play the game’. In mission three, it took me almost an hour to find out how to get into the basement of the Addermire Institute. I had to refer to floor plans to orientate myself within the building. 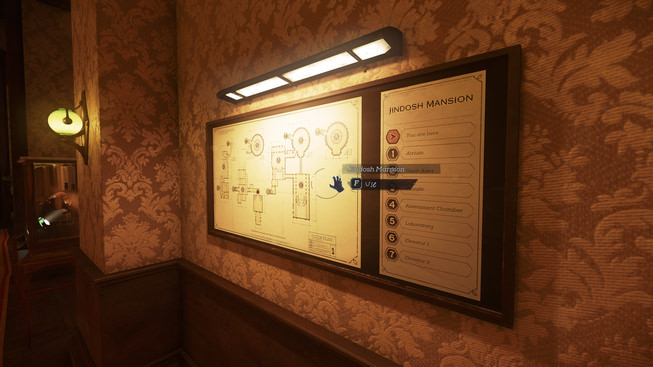 As much as I like to play it stealthy, it is hard to do so, because the combat is fun. The AI offers a variety of mechanics, like fleeing, calling for help, using ranged weapons, parrying, feinting, and attacking you simultaneously (up to three enemies, depending on the difficulty settings). Corvo and Emily are versatile: they can counter-parry; knock-out and/or throw enemies; attack from above; attack from sliding over the ground; and from vaulting over obstacles. Many hostile encounters are so dynamic, from the moment you engage and fight, to the moment you escape or use tools to finally solve the conflict violently.

I also like the implementation of a base of operation, The Dreadful Wale, in which you return after each mission, to find it just a bit different everytime – with new objectives, notes, journals and other items to find. This reminds me so much of Deus Ex or Thief 3. 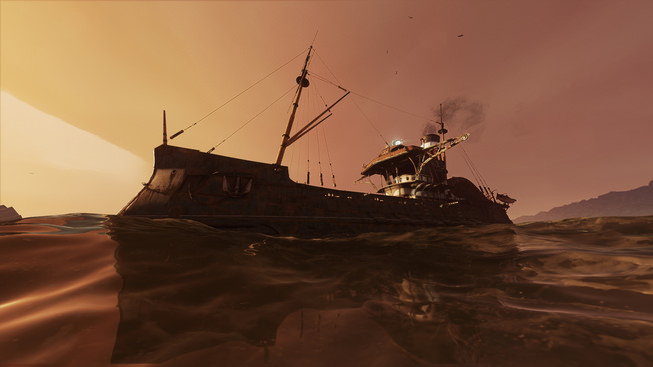 Regarding the visuals. From the fonts being used to the user interface and graphic fidelity, everything just looks brilliant. Every level is not only filled with narrative details, like letters from the guard’s loved ones, making enemies even more authentic and believable, or hidden rooms or places that were being used by guards and other personnel; it’s like some places tell you a tiny story of its own. Like this one: 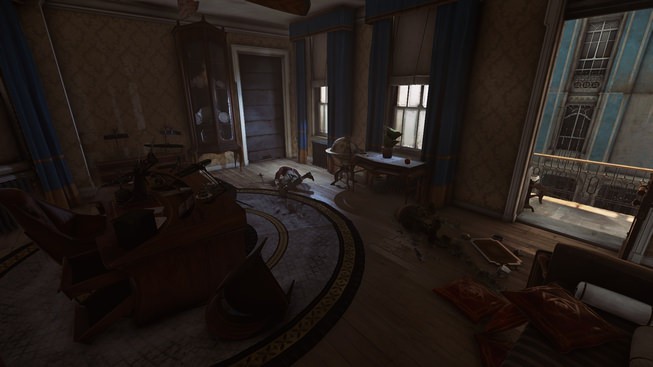 Yet, it is also the graphical details that are really striking. Posters, books, garbage, bottles, glasses and other items are authentically scattered throughout any level. Graphic fidelity may not be state-of-the-art, but it offers high scalability on PC and many modern features like HBAO, high detailed volumetric lighting and screen space reflections and features like adaptive resolution, just to mention a few. (although I’ve read the adaptive resolution might not has worked at release, it worked for me, when I tested playing at 1440p or 4k). 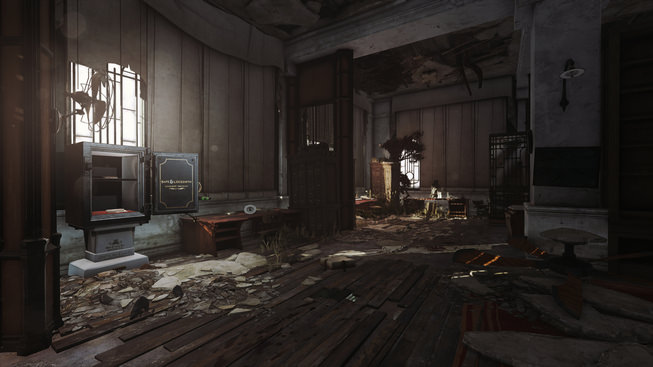 I had some struggle with the performance and frame pacing at first, because I tried to maintain 60 fps on a 1440p resolution. I lowered some settings and could achieve that fps target in many areas. Since I’m playing with mouse and keyboard, I notice fps fluctuations right away and they are more annoying when playing with m/k instead of a gamepad. As much as there are many areas with stable 60 fps, there are many areas in which the fps drops down to 40, and even subtle drops of like two or three fps, not noticeable in other games, are immediately punished with stuttering in Dishonored 2. I reduced the resolution to 1080p, set every visual setting to ultra, increased the TXAA sharpness from 4 to 10 and have had no problems ever since – rock solid 60 fps in almost every scenario. Anti-Aliasing, at this resolution, is pretty good with TXAA, which makes me want that in every future game. Fallout 4, Assassin’s Creed Origins and Deus Ex: Mankind Divided are only a few examples offering a similar method under the same term. I like the smoothness, the almost cinematic look, and even more If I have an option to regulate the sharpness. 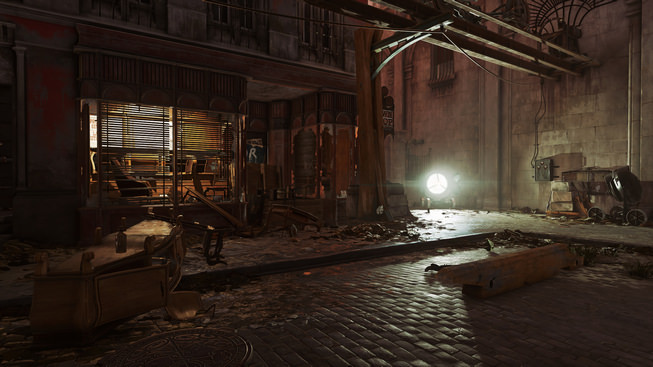 Even the sound design is remarkable. There are sounds, authentic city and building noise everywhere. You can hear water running through water pipes, fans stirring up air, lamps with electrified sound and so on. 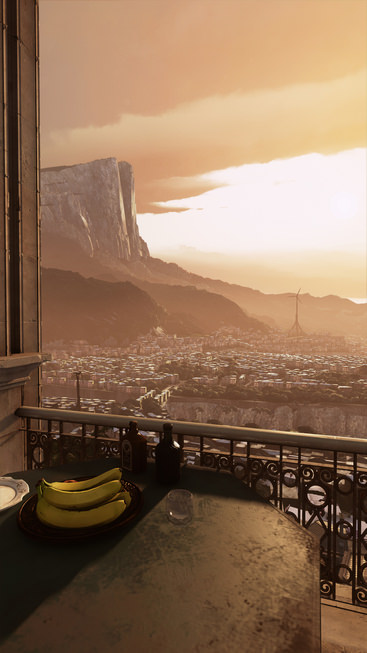 There are things I dislike, however. The difficulty seems rather unbalanced or ‘buggy’ compared to Dishonored 1. Civilians with their backs turned notice me, when I, crouching, quietly as possible enter the room. Guards alter their routes upon (quick) reload, make it very unpredictable and I often fail again, after failing once which lead to the quick load. The gameflow gets heavily interrupted if you target a ‘ghost’ playstyle/trophy/approach. It’s like the game almost wants you to go full chaotic, because that’s the only playstyle keeping the gameplay steady without reloads. But I don’t think that was the developer’s intent.

Right now, I’m at mission four, in the Clockwork Mansion, and it’s way too early to say something definitive about the game’s story. I wonder how the plot pans out, for I like the premise of playing a violently disgraced Empress (I choose Emily as playable character) going underground and try to settle things. It’s different to basic storylines of characters working their way up from being a nobody to being someone with rank and nobility.

So far, I’m enjoying almost everything the game offers. 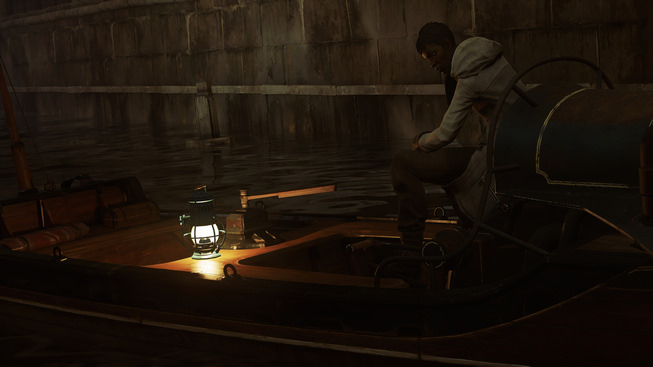 High res versions of above screenshots are on at Flickr.